In the past 48 hours, two of my closest friends and I have all been left on the wasteheap of romantic rejection.

I got an “I’m just after friendship” via WhatsApp from Captain Skype. Miss A was on the receiving end of a gigantic bit of ghosting from SuperLike, and for Miss P… well, the less said about Funky Glasses at this point, the better.

For context, the three of us are on the far side of 35 and have all been single for the past two years. We have careers, friends, travel opportunities, and between us have six degrees, four properties, three cars and a dog.

We keep fit, cook good food, read non-fiction autobiographies, and play sport. Go to festivals, wear great clothes without being ridiculous, volunteer for charity, are members of boards… In other words, we have lives.

While we look after ourselves, we’re not exactly high maintenance.

Perhaps guys think we’re on the cusp of needing to procreate sooner rather than later (gee thanks for all the coverage on fertility falling as we age, interwebs) and they assume we’re desperate to extract sperm in a sneaky game of entrapment. Personally, I have come to terms with the idea that I may not be a mother in the future, and you know what? I’m ok with that.

I’m not trying to find a husband.

At nearing 40, I don’t think I could bring myself to even wear a wedding dress.

Like my friends, I solidly subscribe to the idea that I’m not going to find someone to love without first being content in myself. I work hard to be that.  Of course, occasionally I get lonely but I am savvy enough to know a relationship rarely fixes it.

And yet. Here we girls are, being each other’s permanent plus-ones, sharing failed tales of tinder gone wrong and then when we do actually like a guy, it doesn’t ever seem to be reciprocal.

In an act of frustration I downloaded a book, “The Catch” by annoying Brisbane Times columnist Samantha Brett. I say “annoying” because her columns often started with “These days…” followed by a sweeping generalisation.

I didn’t stumble on the book. Rather, it was referenced in the blog of a friend who said it contained a couple of good take-aways: Mostly, be true to yourself and let a guy fit around your life.

After receiving the “just so you know, I’m only after friendship” text from Captain Skype, I started thumbing through the book looking for clues.

It started well, the book said: “Don’t worry, it’s not you.”

Then proceeded to detail all the ways it was, in fact, me.

However, if InGreySpace was right, I needed to persevere and find the take-aways.

In the case of Captain Skype (so called because he once suggested we skype rather than actually catch up), it was the first man I had gone a bit butterflies over in more than a year.

I won’t lie, I was keen to catch up: He’s hot, I liked his company and he had a mischievous side I found appealing. I suspected he may have even liked me.

When we did eventually catch up for a wine, it rapidly turned to five and degraded into the sort of conversations The Catch now tells me I should always steer clear of. In fact, my behaviour was so off-fleek going by the book that I can literally put it in a table. 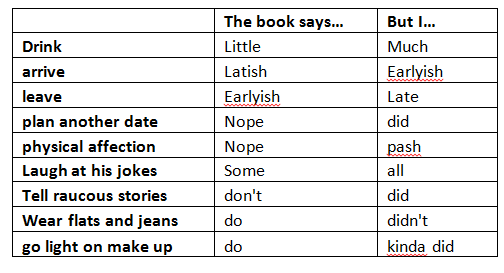 Yet all the behaviours The Catch tells me to display don’t come naturally to me. I am not good at being reserved, holding back and playing hard-to-get. Even less so when faced with a situation that is anxiety inducing like a first drink with a gorgeous guy.

My overextended self, to use the luminaspark terminology, is prone to becoming emotionally stretched, demonstrative and impulsive. If I reflect on my Saturday night, I can see that.

God it would be so much easier if I could just say “hey you seem awesome, wanna hang out?” without having to appeal to some pre-historic lizard-brain desire to chase, and without me ending up tackling a swarm of anxiety.

But the Catch tells me it’s not ok to be seen to be interested. The Catch should always be cool, calm, collected and aloof. For the record, I am basically none of these things.

That said, my uncoolness and anxiety probably just killed something that would have died a slightly slower death anyway: Captain Skype has more than his own fair share of issues, and I was conscious of the occasional alarm bell going off in the back of my head during the evening of things that could prove hard work down the track.

But still, this week the three of us are nursing a collection of bruised egos and it might take a little while to get back out there agin.