Lawson the Clydesdale survived the fire that destroyed Southampton Homestead in WA’s southwest, although he wasn’t entirely unscathed.

The once hairy-mammoth of a horse was pretty singed. A lot of his coat had been burned off and in the pictures I saw of him on facebook, he looked about as miserable as a young Clydesdale can get. The good news is he’ll be alright.

The rest of the homestead fared far worse. For the owner and resident of Southampton, my friend Jeff, his entire home was destroyed by that firestorm two weeks ago, which started from a lightning bolt.

Jeff was in the UK at the time. As soon as he heard the news, he boarded a jet to head home. When he landed in Singapore, I can only presume he turned on his phone to find countless smses from journos asking to come down and film the destruction, prompting Jeff to ask me if I could get them to back off a bit.

I did what I could to protect Jeff from the scrum, hopefully buying him enough time to bury the animals that had not made it through the fire, and finding a vet to look after Lawson. (Brief segue: I think “Lawson” is the most fitting name for a Clydesdale.)

This isn’t my story. It’s the story of someone else’s home. Jeff is now starting again from scratch, bringing the historic Southampton homestead back to life. The new Southampton will no doubt reflect his core values of sustainable living.

You might have read about this. It was in the news.

Anyway, it got me thinking, because this happened about the same time the ever-insightful Shona put the question to me: “Why do you want to own a house? The answer will help you make up your mind.”

Perhaps it is the less tangible drive to feel a sense of accomplishment in life. A bit of FOMO – while I’m preparing for a rental inspection and won’t buy a new couch because who knows how much longer we’ll live there… other people get to paint rooms, put hooks in the wall, and whinge about the broken hot water system that they actually own.

Maybe I just want a home for the Wild Horses of Natimuk Road (they’re not Lawson, but I want to give them a home anyway). 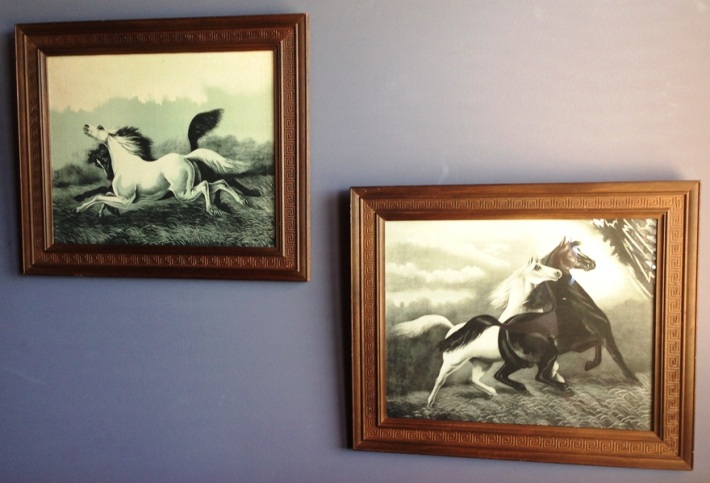 I know I need a wall long enough to become home to my wooden oar. Beyond that… this question so flummoxed me, I started a pinterest page (yeah, that’s all I need: more social networking procrastination) where I could pin things I like about houses.

Then I Googled it: Oddly, the potential to own a dog was on nearly every list of reasons to buy a house I came across.

Clearly, I’m not the first person in the world to dream up the Puppy Conundrum.

I also know lots of people in the world don’t own a house. In successful economies like Switzerland, only 34 per cent of people own their home. Thus they’re the exception rather than the rule. In basket-cases like Italy, home ownership is at 78 per cent. Ireland at 83 per cent. Australia comes in 3rd at 69 per cent. On a large scale, home ownership isn’t an indication of economic astuteness.

He cuts through the crap well, the Swede.

Although he did talk about buying in Detroit, where it’s possible to pay $5000 for a house and expect change. Something about the population halving between 1950 and now, where unemployment is close to 25 per cent in some areas.

I told him that sounded like Norseman, where they once raffled off a house as a fundraiser.

Australia All Over on the ABC used to do a “Why I live where I live” segment of a Sunday morning. It was a weekly fixed point in my years growing up in the Wimmera, and hearing it now brings back the smell of freshly-mowed grass, snoozing on the Victorian-era couch in Natimuk Rd and eating Arnotts choc-mint biscuits (at $1 a packet, they were the epitome of value to my 14-year-old self.)

The tales people would tell about their homes, their far-flung places where they use ingenuity to rig a hot shower off the tank because they’re so remote, have perhaps given me an unrealistic and romantic notion of what it is to own a house.

What I do know is after seeing the destruction of the Southampton Homestead and the narrow escape of Lawson, home ownership is a road that will, from time to time, pass through heartache.

But it seems the alternative is a life of indifference to the building in which you live. I am not sure you can love a rental.