Initially, I thought Creole was a single language. However, a few minutes on the iPad reading Wikipedia proved me only half-right, again strengthening my theory that Douglas Adams was uncannily accurate in his description of the Hitchhikers Guide to the Galaxy.

[Wikipedia] has already supplanted the Encyclopedia Galactica as the standard repository of all knowledge and wisdom…The Guide is definitive. Reality is frequently inaccurate.

Of course, I do not have a Babelfish, although it would be rather useful in understanding Asha’s French-derived Caribbean dialect that makes her sound particularly cool.

I met Asha because I outsource to her some tasks I’m not particularly good at doing myself: Specifically, ensuring the ongoing cleanliness of the Wellington Street warehouse apartment.

Floor washing, dusting and such-and-such need to be done, but I’m not an expert and I’m also not very good at it.

Conversely, Asha is an expert. She’s introduced me to many new cleaning products that are by varying degrees glorious-smelling, cost-effective, environmentally not-horrific and fit for purpose.

Thus, I’ve come to the philosophical standpoint that within reason, outsourcing to experts is a good thing to do. Rather than attempting to wrestle the Dyson cyclonic vacuum cleaner out of the cupboard every week, Asha sorts it out for me. Rather than spelling things correctly, I like to have sub-editors.

Sadly, I’m yet to find someone willing to sub a blog.

When it comes to home-buying, the agent to which you outsource is one of two things:

In line with my philosophy towards outsourcing, I booked a session with buying agent firm Property Wizards in Subiaco, because their website had the least grammatical errors and they responded the quickest of those I emailed.

Trevor was lovely and told me firstly a bunch of stuff I knew, then some stuff I didn’t know, and then the bit I really wanted to hear: That for a set fee, they do the leg work and therefore I wouldn’t have to spend precious weekend hours going to home opens for properties that might not suit what we are looking for.

(The critical issue of course we need to know what we want, and that’s a post for another time.)

These things I more or less knew.

He then went on to say the Wizards take into account a heap of other stuff, like council rezoning to see whether the property can be subdivided and the land then on-sold to some schmuck who wants to build a big house on a small bit of land.

To illustrate the point, he drew me some pictures that looked like this. Note the side drive-way which allows access to sub-divided land: 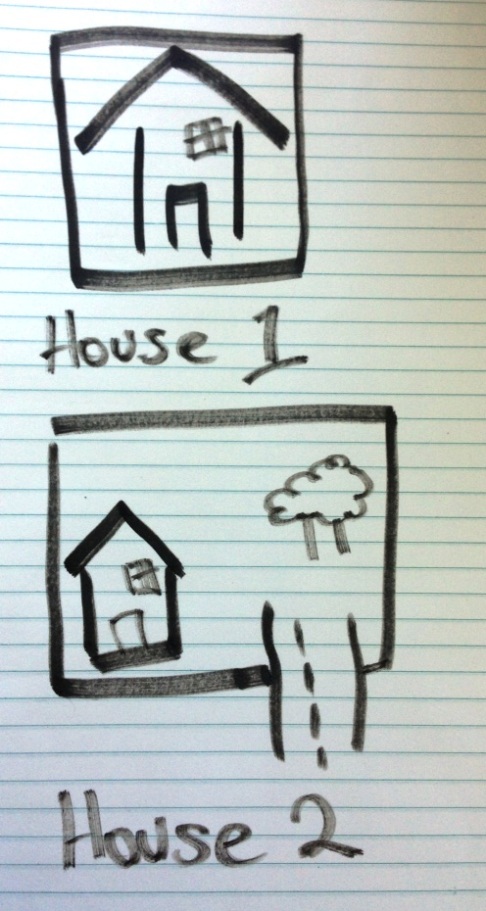 Now this again plays to the emotional state of house buying.

If I bought a house with a big backyard, I don’t think I’d want to sub-divide it.

There are already enough tinsy-tiny blocks with ginormous 4x2s on them, which don’t exactly help high-density housing. It’s still a small number of people in a huge house, and that’s not a good thing for Perth.

I’m not looking for the quarter-acre block here, but selling land to build a metropolitan McMansion doesn’t seem right. I’d rather see the whole lot sold to a developer and some quality high-density housing built, rather than cut my backyard in half and have a house built ad-hoc on the back.

So I’m not sure if a buying agent is really the way for us to go. Also, unlike in the US, buying agents to take a fair chomp, athough the argument goes they get you a better deal, so the outlay in the end is much the same as if you didn’t have a buying agent, but you’ve just saved yourself the legwork.

Buying agents, the interwebs tells me, are very common in the US and anyone who doesn’t use them is considered dopey, cheap or a bit of a property maverick.

When I mention the concept to buying agents to my peers, the reaction tends to land in two camps.

For blokes, the reaction seems to be: “Everyone manages to buy a house, it can’t be that hard so why pay someone else to do it?”

For women, the reaction is: “Buying a property is a major decision and getting the right advice is probably important.”

The Swede put it rather succinctly:

“A good house, like a good share investment, will always be a good house. It’s hard to try and trick the market, all you can do is buy the house you like that is interesting and you can afford. It will still be affected by the market, but hopefully less-so than a bad house.”

Well, he kind of said that. But with an accent, and possibly some swear words and amusing anecdotes, with a general sense of bemusement that his girlfriend is somewhat overwhelmed with this whole property-buying thing.

Also, can I say banks don’t help? Here’s what the Commonwealth Bank says:

“Buying your home is likely the biggest financial decision you will ever make.”

Is it just me, or is this whole industry geared to make property buying as difficult, time-consuming, confusing and convoluted as humanly possible?