Joan Rule, my grandmother after whom I was inspired to start a blog in the first place, passed away on Friday.

Like the many thousands of families which have a member in the late stages of Alzheimer’s Disease, we hope her death was a release. Her mind had left some time ago.

Gran was an incredible influence on my life. She was a yarn spinner, a meticulous diary-keeper, and had a love of great clothes. She also told the same story multiple times. I now do the same, and have discovered this was not a quirk of dementia, but rather a genetic flaw.

Perhaps it’s a trait that gets less by generation. My kids could be normal. Maybe.

Anyway, I’m heading back to Horsham for her funeral on Wednesday, hence the hiatus on the blog.
That said, we’ve not been totally slack.

We’re averaging about five houses per weekend. Last weekend we debated over a magnificent renovated cottage in Highgate with grotesque purple carpet and striped wallpaper. I am pretty sure it was the set of Beetlejuice.

Another was a soulless townhouse near the Karrakatta train station. The view of the cemetery was… nice?
On Easter Saturday we visited a died-with-a-felafel-in-his-hand style rental in Mt Lawley with a zillion bedrooms and at least as many tenants. In the afternoon we checked out a beautifully renovated fibro number in Maylands. It was cute, I suppose. The Swede said: “It’s like an old person’s house.”

Then an old person came and also inspected it.

Also, it had a cat-flap through the wall. On closer inspection, the flap opened to a netted side allyway of the house where a GINORMOUS TABBY CAT stared malcontently at us from one of those cat house scratch-post things. The furry behemoth of a pet was effectively living in a giant netted tent. Presumably this relate to its girth and general distemper.

At this point, the Swede proceeded to make “ksss ksss” sounds at the cat, which is the Scandinavian equivalent of “puss puss”. (Incidentally, the latter translated to English is “kiss kiss”, which sounds a lot like “kss kss to call a cat. A curious linguistic coincidence.)

The Agent was unimpressed, and asked us to not disturb the cat. 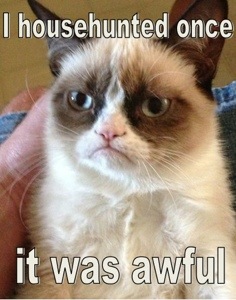