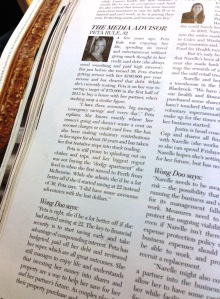 I don’t have a dedicated magazine-reading habit.

New Weekly was probably my favourite as an undergrad. I’d read it up the back of the theatre with my university cronies during Media, Law and Ethics lectures.

The irony that I now teach that exact subject at Edith Cowan University is not lost on me, and from time-to-time I wonder if my grades would have been better if I’d stopped reading about Princess Fergie being left off the invite list for the royal family’s New Year shin-dig, and instead paid attention.

And maybe written notes. Or something.

The trashy mag habit didn’t seem to do my mates any harm. One went on to be the ABC’s London correspondent and another is a well renowned football reporter who is so successful he has his own Wikipedia post. Comparatively, I feel like a bit of an underachiever.

But that’s enough fishing for compliments and it’s about now I should get to the point.

This month, I am in Madison magazine. This is not an amazing feat. The reality is media-land isn’t that big. It’s not unusual to see a Facebook or Twitter post that say something like “does anyone know identical twins born in 1986 with chronic asthma that were separated at birth, I need to find people matching this description for a story.”

Thus I helped out a former Vic Roads colleague who now writes for the Fin Review, who was scouting for case studies on behalf of a friend who writes for Madison. The story was about finance. Madison isn’t as trashy as New Weekly.

The hilarity of the whole thing was the financial expert called in to evaluate my financial philosophy (do I even have one?) wrote “Peta would be in a much better financial position if she’d started saving at 22, rather than 32.”

The expert was called Wong Doo. She suggested I need to upgrade my insurance and get some sort of finance protection, in the event I actually bought a house so I could still afford repayments.

This is probably the only part of this entire diatribe that is relevant to the house blog factor.

James-the-radio-quiz-king also wrote to me this week and suggested this blog needs an ASIC warning on this blog. So here it is:

The information in this website and the links provided are for general information only and should not be taken as constituting professional advice from the website owner.

That said, anyone who takes financial advice from a blog which features Hitchhikers’ Guide to the Galaxy as a legitimate reference text is perhaps doin’ it wrong.

Back on the househunting scale, today is the day we should find out if our loan pre-approval comes through.

Sat-the-Bargain-Hunter recommended a broker, who came to our house and recommended exactly the same loan as Scott the Barefoot Investor.

However he did a few other funky things that more suit our specific financial situation and promised to do the paperwork on the First Home Buyers Grant, which was good.

Meanwhile out in real estate world, there doesn’t look to be that much on the market worth checking out this weekend.

So it might be a round of golf for the Swede and I instead.

Although we played last weekend. I won. That was possibly not a good relationship move, and I may need to get more double-bogeys in the next round.