Current location: eating pancakes at the Cadillac Bar in Exmouth. Poor Zeus had to stay at camp where he is busy excavating.

Warroora station. About 30km south of Coral Bay on Ningaloo Reef and not at all a bad spot for ‘wilderness camping’.

Fuelled on a pretty epic hamburger-with-the-lot from Minilya, Zeus and I drove into Warroora (pronounced Warra) full of confidence, and on the recommendation of the couple we had met the previous evening.

The reception was deserted and for the first time eftpos payment wasn’t an option so I put $10 and an IOU in the payment tin, had a chat with another travelling family and settled on driving into Stevens.

I did not read the advice on the board which said “4WD only, very sandy on west side of dune.”

15 mins later the Jeep and I were careering down a huge dune on very sandy tracks – so sandy the wind had covered any semblance of tyre tracks from previous entrants. But the site was breathtaking: camped behind the dunes so protected from the southerly, but the beach was perfect white sand and flat turquoise waters protected by the coral reef. The line in the sand is something I drew to remind me where to come back up on the beach to find our camp!

Day two we headed in to coral bay for a coffee and a tomahawk (that was literally the shopping list) and some cash for the Warroora gang. Today I am reminded (sorry TC) how much more I like Exmouth than Coral Bay. The tiny tourist spot was PACKED. I know there is a four-week wait to get into the Coral Bay caravan parks and honestly, it’s like schoolies for grey nomads… But how could they possibly add more capacity? It was busy, and it’s not even school holidays.

The new Coral Bay pub doesn’t allow dogs (neither does the old one) so Zeus and I collected coffee at one of the caravan park cafes and did actually manage to pick up a tomahawk at the supermarket. This prompted much hilarity amongst staff as I was there in a hat and dress with a little pug dog walking around with an axe…

Day three Zeus and I decided on a rest day and just moved from the tent to the beach and back. During one of the beach expeditions, we met these guys:

The Ringrose family are on their way around Aus for term three of the Victorian school year, and are heading back towards their home at Port Phillip Island where Glyndyn works as a surfboard shaper. They’d come to Stevens from the more popular (but less protected) 14-mile campsite. Zeus was quite taken with the boys and I think he would have liked to go with them…

…we got chatting and I mentioned that although I’d managed to flatten my tyres with the help of a couple from the Yarra Valley (they have relatives in Jeparit for the Wimmera-based readers) who I bought an ice-cream to say thanks, I was at a loss as to how to re-inflate said tyres upon my departure. I presumed I would meet another friendly traveller who would help me out…

At this point, Glyndyn pointed out he had a spare air compressor (as you do) and was happy to give it to me. HOORAY! Thanks guys and happy travels. 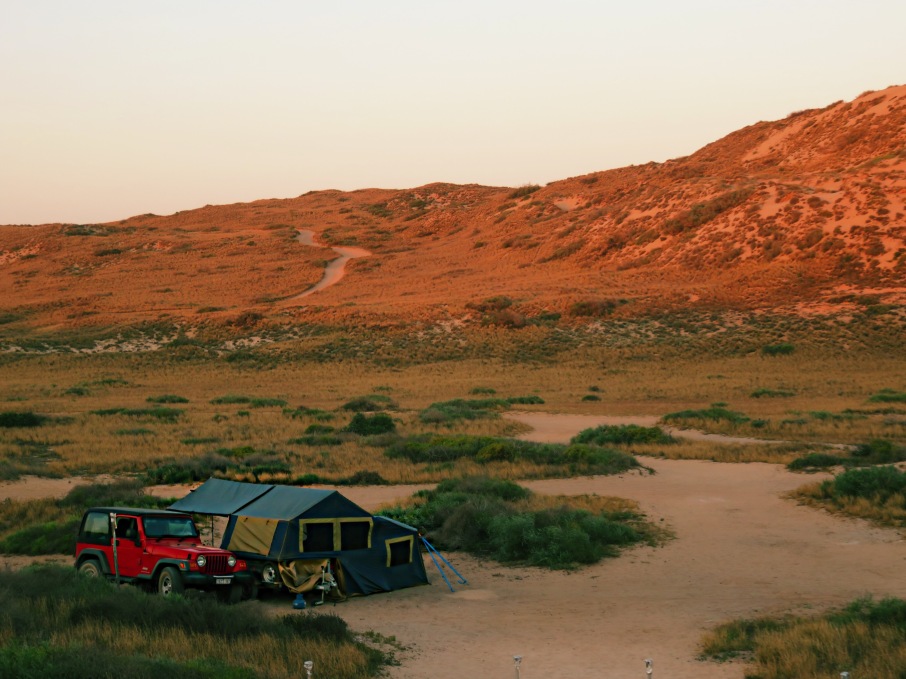 So, I own an air compressor. I had nothing to give them, so if you need a haircut or a surfboard shaped, head to Phillip Island and help me repay the kindness.

Day four: departure day. The sand dune had been looming for a couple of days (see pic above). Although the Jeep and I were easily capable of shooting up and down it without the trailer, I knew it could prove difficult to get up the sandy side fully laden. And I wasn’t wrong.

After packing up and preparing to hit the road, we attempted to traverse the very boggy base of the sand dune only to get the trailer well and truly stuck.

An hour later and I’d removed the jockey wheel and gas cylinder, mucked around with some digging and had no luck. I ate a muesli bar while considering the situation – a poor breakfast substitute as I’d hoped to eat up at the homestead.

So I abandoned the trailer and drove into the homestead looking for help. It was a $500 towing fee and I was preparing to fork out when the wise German lass working reception suggested I go back and have another go. after all, I’d seen others traverse the dune without much incident.

Zeus and I went back to camp, unloaded even more out of the trailer, dug out the wheels and put down a yoga mat and rubber doormat under the tyres and I managed to push the trailer onto it. I managed to turn the car around mid-dune and reverse back down the narrow back (thanks WARC for making me a killer reverse-artist) and re-hitch. Into 4L, gave the accelerator a nudge and BAM we were flying up the hill.

By this point it was 11am. When I removed my sunglasses there was a literal ridge of dirt on my face. My hair had developed sentience and was making decisions independent of the rest of my body. It was grim.

Three more trips down the dune to collect the rest of my belongings, converting the lbs to psi on the air compressor and by lunchtime, we were on the road. Zeus was exhausted and slept the whole way. He’s a little trooper, wasn’t even fazed by the 4Wding and corrugations any more.

En route to Giralia station stay, the gaffer tape which had secured the front of the roof against the wind began to come loose and the cabin of the Wrangler got very noisy very fast. Zeus and I took a break and took stock: we were dirty, out of most consumables, everything that needed charging was going flat and dirty washing now took up a whole box.

When the turn-off came, we stayed straight and headed to Exmouth where a caravan park was rumoured to have free wifi.

Upon arrival, Zeus undertook the first point in my losses list, and I had a shower. The reception girls didn’t recognise me the second time they saw me! A great bunch though, they have a resident cavalier cross called Tobias who is truly adorable and Zeus spent some time annoying him with friendship.

Then I hit the pub for dinner. This is important because all I’d eaten all day was a muesli bar and I’m not the kind of person who ‘forgets’ lunch.

A 12-hour sleep and today we will wash up, get sorted, look for a Sturt desert pea and consider if we can find a dog sitter so I can head up and do the drift snorkel. If not, it’s been done before but while in Rome…